I'm consistently most content
when working with focus at home.
I savor opportunities to be
absorbed in a project,
surprised by time's passage
and so satisfied that
I've transferred an idea onto paper. 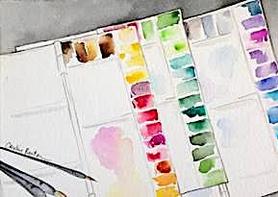 From my earliest undertakings--

to my most recent maps,

my style has remained light of heart and touch.

I'm largely self-taught as a watercolor artist.
With a BA in English/Fine Arts
from Colgate University and
MS in Environmental Studies

from Antioch University New England,
I have long considered

the meaning of place.

I love considering my home
in New London, NH
from the perspective of my painting.